RIBOT presents the first solo show in Italy by Nelmarie Du Preez (Pretoria – South Africa, 1985, lives and works in Pretoria) curated by Maria Villa. A selection of recent works that transport the onlooker into an alternative universe, one constellated with robotic devices that analyse and question the relationship between man and technology.

The title Atmosphere for Anticipation denotes the artist’s interest developed over her more recent studies on the concept of ‘prediction’, meant not so much as a supposition based of conjectures and clues, concerning what is to come, but as a genuine discipline that uses the future in its actual decision-making processes, implying an action and a movement. It’s from these specific research that Project 01: The Movement originates: the installation on the first floor of the gallery, conceived and staged especially for the show.

The work presents an outright reconstruction of a place of worship of the future, abandoned on Mars and brought to life by elements with a high symbolic value: the flag of a para-religious movement, celebratory totems, the relics deployed in the various rituals emerging from the orange sand, and a robotic hand with a human semblance placed symbolically in the centre of the scene tapping its fingers on ‘Mars’, which is in a state of emergency. 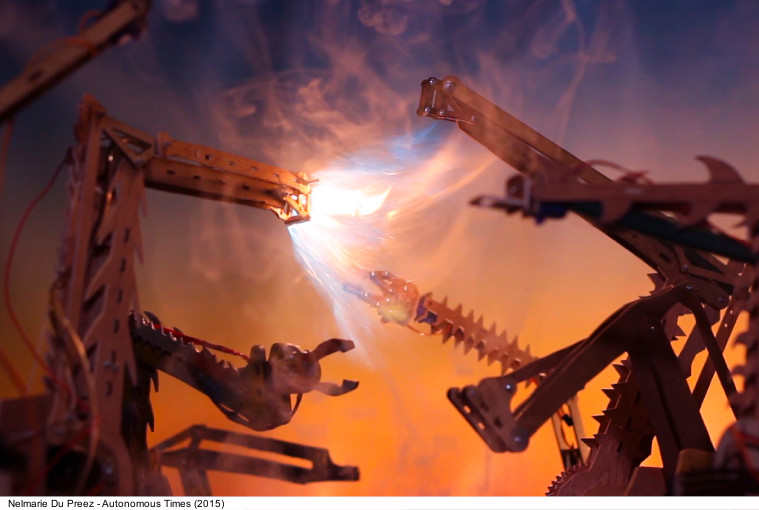 An estranging environment in which mantras sound out heralding evolution notionally constructed by a sect devoted to the worship of progress and consecrated in the figure of a technological and innovative prophet. Inevitably referable to Elon Musk, this imaginary high priest is the emblem of those figures working in the field of technological development who incite a sort of veneration around them, activating a system of thought akin to that of religions and sects, involving a great number of people in the implementation of their ideas, to the point of conditioning expectations and, in some ways, determining the way in which we all spend money and resources.

The exhibition also features a number of previous pieces, showing the evolution of Nelmarie Du Preez’s work, and which underline some of the peculiarities of her artistic language, above all the ability to construct genuine environments, capable of letting us experience – as well as imagine – a surreal and vaguely dystopic future, constantly poised between tragedy and comedy.

On the lower floor, Autonomous Times (2015) and, on a screen deliberately placed to the side of Project 01: The Movement, we find a selection of four videos belonging to the series Loops of  Relation (2013) and A Continuation (2016). The former is an articulated work that once again transcends genres to combine performance, video and installation in order to analyse the dynamics at the basis of the symbiotic relationship between man and technology. 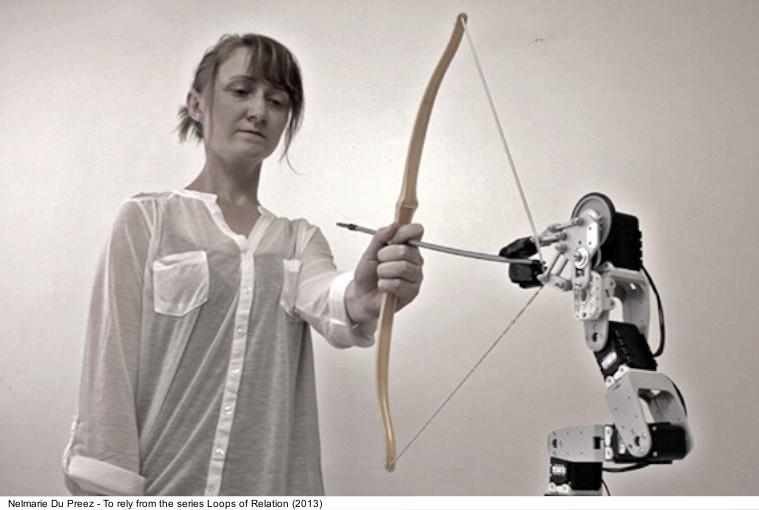 On one hand, the work tells of the ideal life cycle of curious robotic machines: the exploration of their autonomy, their submission to the human mind, their failure and repair. On the other hand, the selection of videos shows how, ever since her earliest performances (to stab and to hit, 2013) produced in collaboration with GUI– a device designed and programmed by the artist herself and drawing inspiration from the actions of the duo Abramović-Ulay– Du Preez’s language and references go beyond the model, to the point of finding their own full imaginative autonomy, as may be seen in the videos to shoot and to collide (2016).

For Atmosphere for Anticipation, Nelmarie Du Preez has come up with a special project offering the essence of all her eclectic work: a small sculpture in clay equipped with robotic components, activated on contact with the human touch. Nelmarie Du Preez’s research draws on various languages: performance, photography, video and computational art. In 2014 she was awarded a Master in Fine Art from Goldsmiths, University of London, where in 2013, she also completed a cycle of studies in Computational Arts. 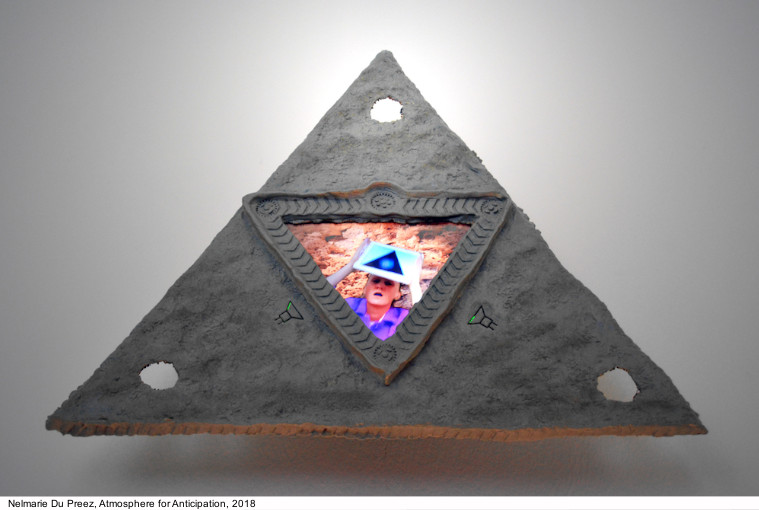