Listening Through. Trespassing the many elsewheres of the body

Digicult continues its media partnership with INBTWN, the programme curated by Claudia D’Alonzo for XL, the extended format of Centrale Fies’ annual programming. The second artistic intervention is Listening Through, a project moving between on- and off-line based on the dialogue of curator and researcher Elena Biserna with artist and researcher Anna Raimondo. Listening is their tool: a prism chosen as a vector of plurality to deconstruct hierarchies, normative discourses and power relations. Curator Claudia D’Alonzo talks to Digicult about the project in the following curatorial text, in a game of references between heterogeneous spatial and temporal dimensions which characterise the entire programme and particularly this second intervention.

The relationship between Elena Biserna and Anna Raimondo has been for years a plot of affections, travelling, reading, theoretical reflections and artistic practices, permeated by a shared interest in listening, conceived as a vector for liminal investigations that move across feminisms, the relationships between public and private spheres, activating participative processes that question subjects and territories, and  everyday practices. Joining  INBTWN becomes an opportunity to continue their meetings, that have often taken place on the radio. Such as the live broadcast of Listening Through that has kicked off the project on Saturday the 25th of July.

On www.inbtwn.it homepage and until the 10th of September, it is possible to listen to the podcast together with the exercises proposed by Anna Raimondo in Toward vaginal listening and Elena Biserna’s score The Resounding Flâneuse. Both works have been originally created in English and they are presented in Italian, the two authors’ mother tongue,  for the first time. 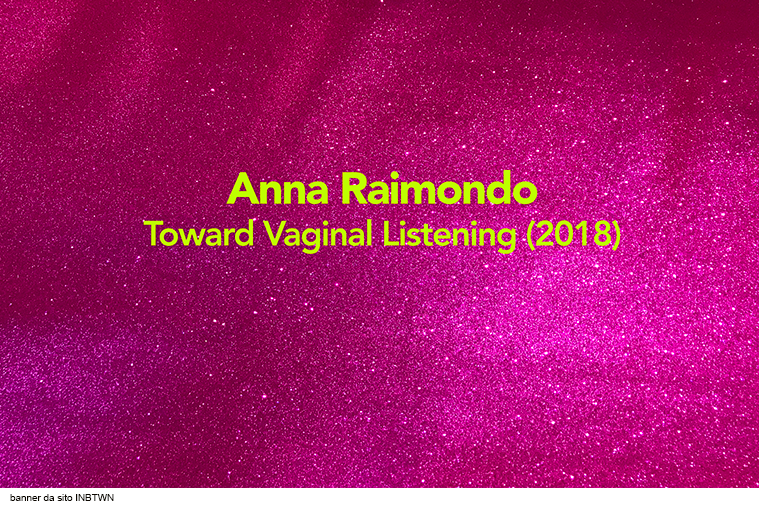 Both works invite the website users to perform and enact places in and outside the body: within a trajectory moving between inside and outside, visibility and invisibility, going from the immaterial places of the radio and the web, to the “intermediate” ones of the body. And from there to the public space, a site to be reclaimed through the act of walking. The invitation of the two authors is to let yourself be guided in this act by the sense of listening.

Anna Raimondo’s exercises call us to listen to the vibratory language of the vagina, anatomic or symbolic, as a way to search the body for what is perhaps silent – “ineffable yet present” – and disrupt narratives which, by organising hierarchies between the more manifest shapes and expressions of the body, impose patriarchal normative schemes on subjectivities.

“Walk at your own pace.

Walk so loudly that the bottoms of your feet become a percussion instrument.

Play the city. Dance at the rhythm of your steps.

Rewrite the city with your body, with your sounds.”

In a time in which the fragility of bodies – in terms of relationships and ways of inhabiting spaces together – is such a present issue, the score becomes an opportunity to expand such attention beyond the contingencies of social distancing- and pandemic-related norms. Discussing spatial practices and relationships between subjects, otherness and public space in a gender perspective can lead us to a reflection on micro actions, embodied and often unaware habits that educate to be cautious, transparent and barely audible or visible in crossing the public space. In fact, before and much beyond the current condition, for persons that are object of sexism feeling comfortable or safe comes often from learning ways to avoid other people’s gaze and listening.

The score created by Elena Biserna encourage the appropriate of the urban space through the sound produced by one’s own footsteps, by one’s voice by singing or screaming, by enunciating oneself by means of  walking through the soundscape of cities at night. 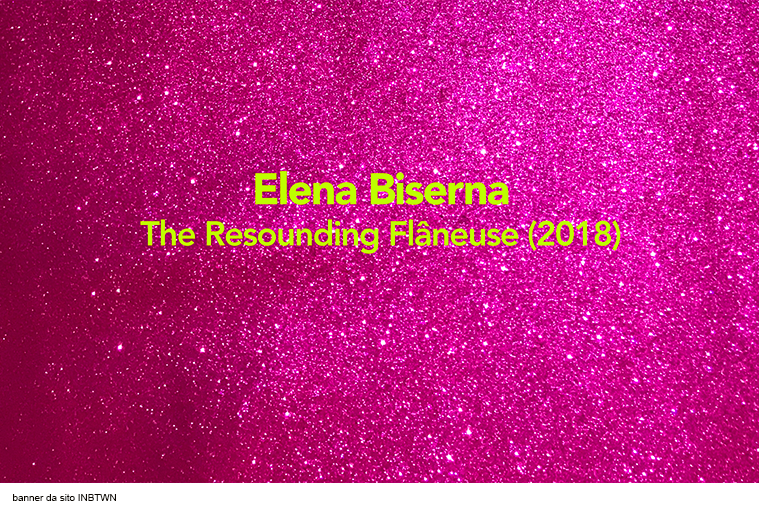 The radio dialogue for Listening Through moves between the alpha and omega of exercise and score, punctuated by listening sessions of sound works by Anna Raimondo and other artists[1]. The result is a discourse departing from the vagina to overturn binary logics related to gender and sexuality, particularly towards the polarisation of active and passive; a dichotomy that, based on a presumed natural condition in the functioning of anatomy and organs, affects the ways in which we learn to inhabit spaces.

This is because – recalling Paul B. Preciado, an author that has been often referenced during the conversation – the anatomic dimension is always a narration, the cultural production of schemes and interpretative codes that we embody and use to identify and describe what we feel. An example of this is the proposal by the two authors to re-think the act of receiving – commonly shared by the ways through which the mechanisms of both the vaginal organ and the process of listening are represented – not as a passive, but rather active function.

The receptive action during sexual intercourse, for instance, is seen as active, thus transforming cavities from potential to real ones. Much of its physiology still remains poorly studied. Furthermore, for the vagina as for auditory organs, processes are often little visible and in order to perceive them one must also pay attention to silences, voids and the invisible features of the body. In light of this, exercising the practice of listening to the sounds and silences of the vagina pushes the journey traced by the authors beyond the biological dimension, allowing us to move further, to discuss how to read and name other sensible categories, hierarchies and qualities inoculated by patriarchal culture.

Dislocation, voices, bodies, genders and the trespassing of many elsewheres are at the center of Listening Through also in the case of the format conceived for the radio dialogue of the 25th of July. Elena from Marseille, Anna from Brussels and the voices of myself and the audience from Centrale Fies in Dro (TN). The fourth, silent, but crucial node of such radio entanglement will be Milan, where Radiovirus, Macao’s web radio that is partnering the project, has managed the direction and streaming session, using free open source tools. 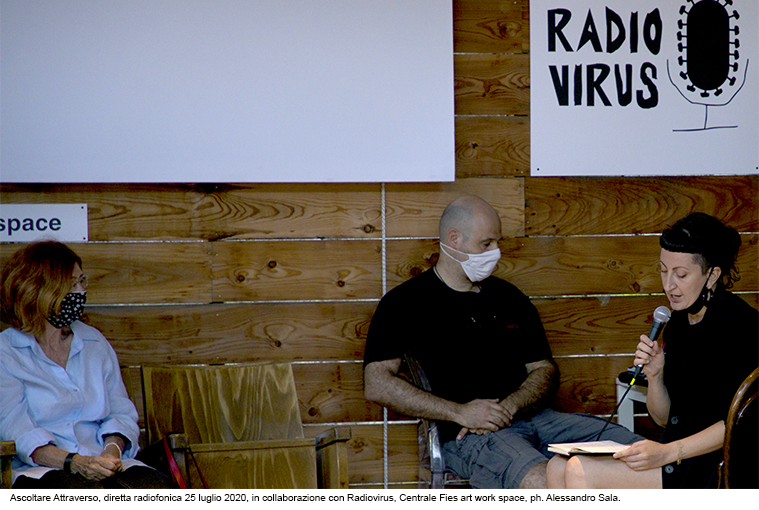 We gathered inside a virtual room meeting only through our voices, invisible parts of our physical bodies. The fact that none of the voices was sharing the same physical space has made the format rather unusual compared to the current radio formats. Together with the authors we decided to radicalise the dislocation, to narrate the everyday experiences and environments that we have inhabited during the last months. Throughout the  lockdown there has been a proliferation of radio projects. New radio stations were born, including Radiovirus itself. Radio as a medium – first and long before the internet – has made the possibility of proximity from a distance familiar to masses of people, through such invisible matter of our bodies that is the voice.

This is also why we have chosen to disclose the complexity and fallibility of the device, not just the technological one, that we were inhabiting together with the audiences, those at Centrale Fies and those listening through the website. Dislocation and the absence of visual support have put us in the condition of practicing with our bodies – in that very moment – a condition echoing the discourses generated within the dialogue on the complexity of presence, on the oscillations at the edge of inside and outside, on the voice as corporality and somatic body, on the relationship between visible and invisible. 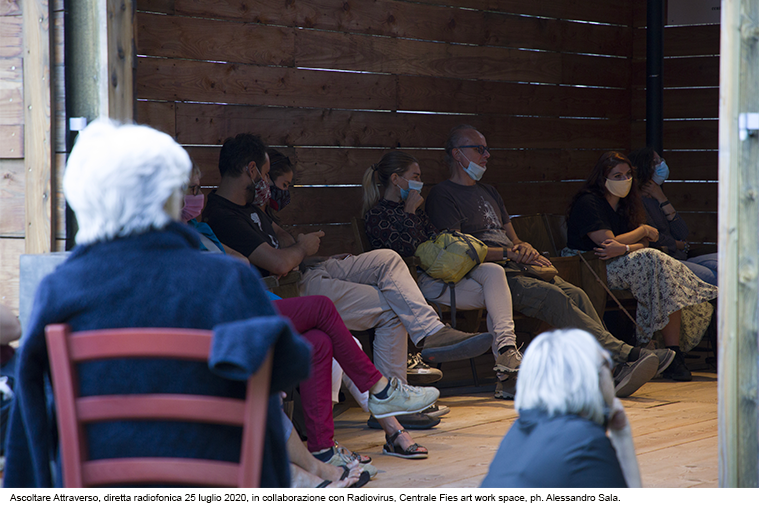 It is not by chance that certain questions have recurred: from where am I talking when I say that I am here? Where am I when I am a body? From where am I listening? These are also references to Michel Foucault’s Utopian Body, an essay born out of a 1966 radio-based conference that played a key role in the conception of the entire INBTWN programme. Foucault takes up some features of the present body of phenomenology and the key role of the senses to move further: if the present body of phenomenology is in the world, the utopian body defined by Foucault cannot be reduced to a place, nor fragmented in several other spaces. The trespassing suggested by Elena Biserna and Anna Raimondo connects the subversion of symbolic and discursive planes related to the body, with the experimentation of other ways to perform listening.

“[…] both transparent and opaque, visible and invisible, life and thing. For me to be a utopia, it is enough that I be a body. All those utopias by which I evaded my body—well they had, quite simply, their model and their first application, they had their place of origin, in my body itself. I really was wrong, before, to say that utopias are turned against the body and destined to erase it. They were born from the body itself, and perhaps afterwards they turned against it.”