Lina Bo Bardi – A Marvellous Entanglement is an enthralling tribute to the great Italian Brazilian architect Lina Bo Bardi by the English artist and filmmaker Isaac Julien and curated by Luigia Lonardelli.

Following the exhibition Lina Bo Bardi in Italia. Quello che volevo era avere storia, organised by MAXXI on the occasion of the centenary of her birth, Lina Bo Bardi – A Marvellous Entanglement offers the public an opportunity to rediscover this pioneer of Italian modern architecture from a new vantage point.

Isaac Julien’s passion for Lina Bo Bardi emerged in the 1990s during a trip to Brazil, where he saw a number of her fascinating and bold buildings. Since then, his artistic career regularly crossed paths with her creative universe, establishing a fruitful and successful dialogue between their works. 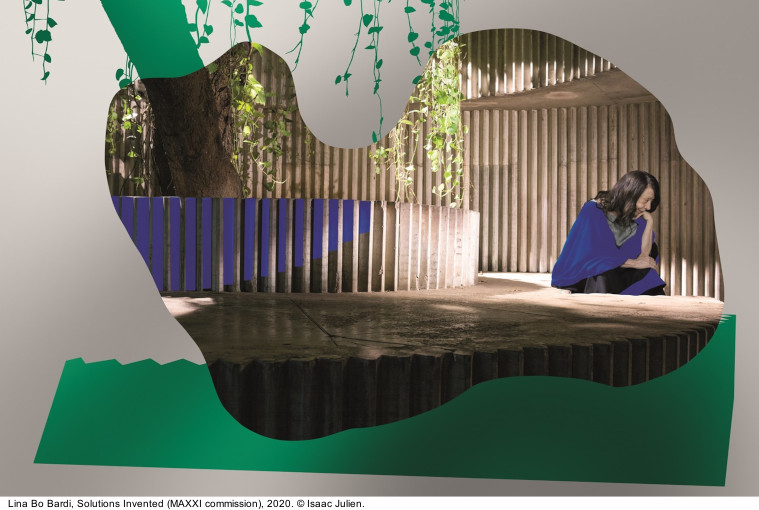 The result of a six-year research project, Lina Bo Bardi – A Marvellous Entanglement is a multi-layered immersive film installation presented on nine screens. The images were filmed in a number of buildings designed by Lina Bo Bardi in São Paulo and Salvador between the 1960s and the 1980s. These locations are exceptional settings which occasionally take on different lives to house events, leisure activities, convivial and cultural initiatives.

On this journey we are accompanied by the actresses Fernanda Montenegro and Fernanda Torres, true screen icons in Brazil and beyond. Montenegro and Torres, mother and daughter in real life, interpret the role of Lina Bo Bardi in her maturity and in her youth, staging a number of the most extraordinary episodes taken from her writings.

Isaac Julien’s installation creates a dynamic yet intimate dialogue with the MAXXI building designed by Zaha Hadid, bridging further to the oeuvre of another pivotal female architect.

Isaac Julien has completely taken over MAXXI’s Gallery 3, conceiving a total work of art in situ, from the curtains to the seats, via wallpapers created especially for this occasion. Thus, we immerse ourselves in Lina Bo Bardi’s life and work: her life experiences, her reflections on politics, society and culture are presented both through her personal architectural vision and through Julien’s artistic vision. An immersive aesthetic experience, characterised by sophisticated research into the composition of sounds and images, Isaac Julien’s video installation—the beating heart of the exhibition—envelopes the viewer and crosses boundaries between artforms, time and continents.

Conceived as a multilayered film, the work is projected simultaneously and alternatively on nine screens, resulting in time losing its chronological feeling. The narrative planes are superimposed and both actresses—the younger and the older Lina—are often present in the same scene. That way, the limit between fiction and reality is blurred and the linearity of the biographical account is called into question. In one of the best-known passages from her correspondence, Bo Bardi writes: “Linear time is a western invention. Time is not linear, it is a marvellous entanglement, where at any moment, points can be chosen and solutions invented, without beginning or end.” 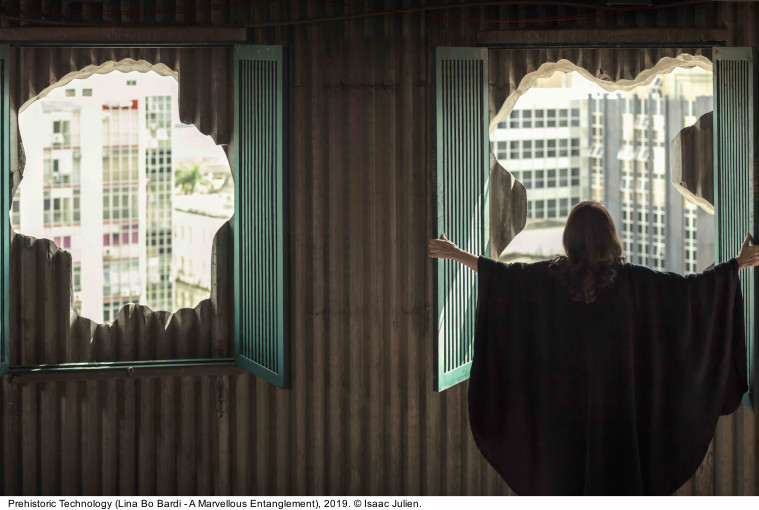 Lina Bo Bardi’s work exemplifies admirably how the union of several cultures can inspire and generate a fervid creative energy. Thanks to Isaac Julien’s delicate sensibility, Lina Bo Bardi’s relationship with multi-faceted Brazilian culture and her bond with her Italian homeland emerge in all their complexity.

Another part of the exhibition features a series of photographic collages created for MAXXI as well as biographical and archival material associated with Lina Bo Bardi. A timeline winds along the glazed corridor of the gallery, exploring the genesis and the production of the work by reconstituting the stages of research and the shooting of the film installation. An archival display concludes the show, accompanied by a biographical timeline: with a selection of original periodicals and magazines, the importance and relevance of Bo Bardi’s oeuvre is enlightened.