First date of the series of INBTWN – In Between

XL was and will be the new format of Centrale Fies: originally conceived for the 40th anniversary of Drodesera and the 20th of Centrale Fies, it discovers now a new correspondence into the research on an “off format” that breaks the one-shot summer tradition and weaves together all Centrale Fies’ annual events.

From the 25th of June the webpage www.inbtwn.it is hosting INBTWN – In Between, the second chapter of XL, new format of Centrale Fies. Later on, every weekend from the 17th of July to the 8th of August, XL is going to take place live and on-the-spot at Centrale Fies (Dro – TN). XL program has been conceived as an ongoing schedule split into chapters, some of which have already been written, some have to be rewrote and others are still to be imagined. Like a book that artists, curators and professionals write together and that can lead us through our time, intertwining with a community that is able to imagine a festival as something to transform. We address this intertwining, this community, in order to face and get in 2021.

With INBTWN, curator Claudia D’Alonzo develops a reflection on the liminal dimension in the relationship between body and technologies, as well as on the consequences of such connection on processes of subjectivity, on the ambiguities between public and private space, and on the production of possible futures and effects of reality.

Starting from the 25th of June and during the following months, INBTWN will take the form of an online program that, by way of the homonymous web space, will expand these themes through the heterogenous contributions of four diverse artistic interventions. The first two, scheduled in June and July, are going to be presented by IOCOSE, Elena Biserna and Anna Raimondo. The artistic participations will concern languages and practices in and out the web, so to turn the site into a lab space that will keep mutating over the course of the program. 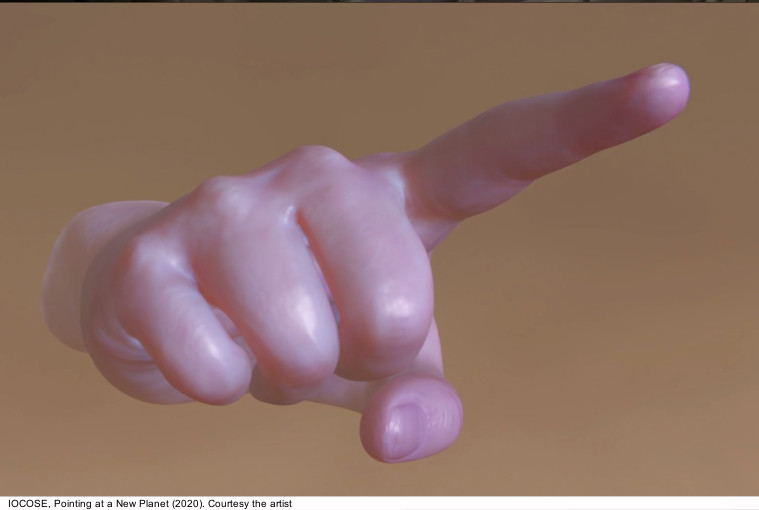 The hyper-connectivity of the lockdown has amplified and made clearer a ‘state of in-betweenness’. For several years now, we have been immersed in such condition tied to the relationship between body and technologies, a condition that sees us as physical bodies and as subjects disseminated on the web at the same time.

The first participation in the program is Pointing at a New Planet (2020) by IOCOSE, music by Albertine Sarges. Presented for the first time, the work is part of a wider research by the collective on how anthropocentric myths of progress and domestication – and fears of global warming – translate into the race to outer Space.

Pointing at a New Planet is an animated 3D video loop that as a protagonist features a three-dimensional model of the hand of the billionaire investor Elon Musk, realized using images and videos available online. Musk is one of the major actors involved in the NewSpace movement, that is the rush to privatised spaceflight and planet colonization

IOCOSE gathered video sources available online about Elon Musk’s public appearances as CEO of SpaceX. As the collective noticed, he frequently gesticulates and point at invisible planets, to make the audience picture the not yet visible future of mankind.

The video is presented with a karaoke song. The lyrics is a collage of the most bombastic statement said by Elon Musk during SpaceX press conferences. 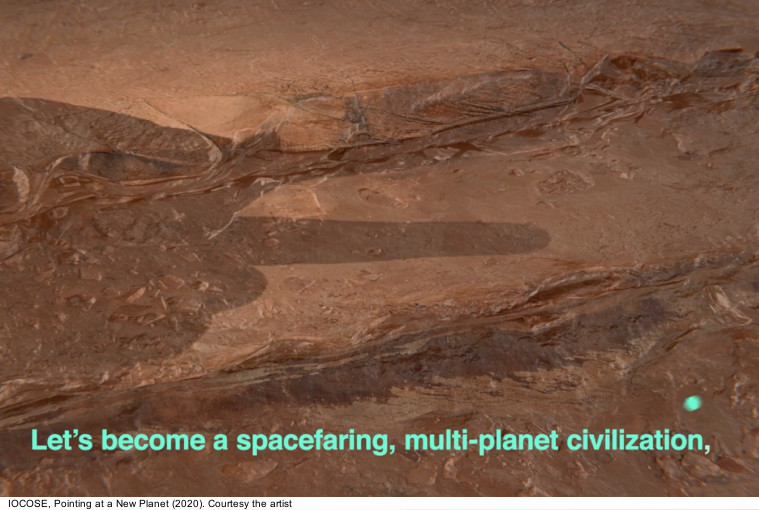 For INBTWN, Pointing at a New Planet is presented in a web based version with a re-elaborated version of the home page. The website layout presents elements and imageries connected to the video work, like regolith. It is a granular material that got into collective imagination as it received the first human footprint on moon’s dusty surface. On the website the regolith is explored by the cursor, the user’s virtual finger.

Through an ironic interpretation of the body grammar used by Musk to make visible spaces that have never been seen, IOCOSE brings to light the absurdities of a space colonization plan characterized by rather trifling economic interests, by variations of SpaceX stocks value and by concern for a planet – the Earth – that day after day is getting less inhabitable.

Pointing at a New Planet, indeed, highlights how the NewSpace sets in space very earthly issues: who will be allowed to inhabit these “elsewheres” and who is going to be excluded? What do the bodies of these modern entrepreneur, both leaders and gurus, tell us about present and future? Which inequalities of race, gender and economic status are they projecting in Space? 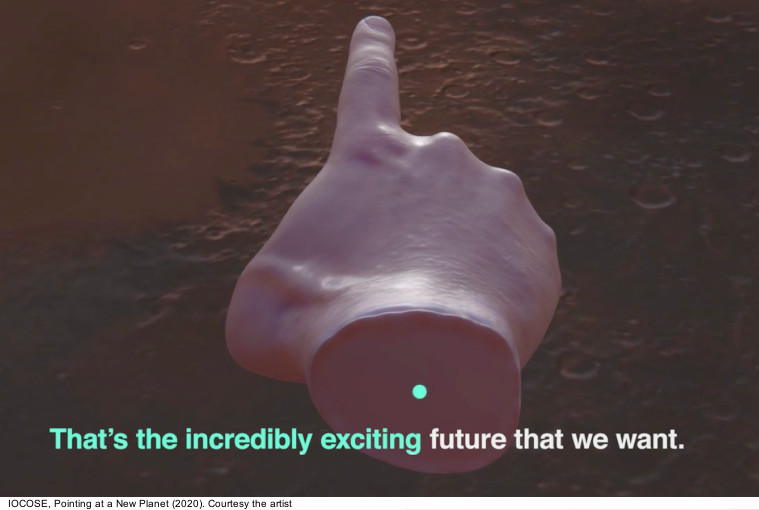 Both authors took the invitation to INBTWN as an occasion to continue a dialogue they have been keeping since a while ago and to share questions, reflexions and voices about gender constructions. Listening is their way to bring down hierarchies, dichotomies, normative discourses and power relations. At the end of July, the event is going to be a moment for the authors to share part of their researches and to incite participation in listening and in action of bodies.

IOCOSE are a collective of four artists and have been working as a group since 2006. IOCOSE’s art investigates the after-failure moment of the teleological narratives of technological and cultural development, in regards to both their enthusiastic and pessimistic visions. They have been exhibiting internationally at several art institutions and festivals, including MAMbo (2018), OGR Torino (2018), Fotomuseum Winterthur (2017), The Photographers Gallery (2018, 2016), Tate Modern (London, 2011), Science Gallery (Dublin, 2012) Jeu de Paume (Paris, 2011), FACT (Liverpool, 2012), Transmediale (Berlin, 2013, 2015), and featured in publications such as Wired magazine, The Creators Project, Flash Art, Neural, Liberation, Der Spiegel, El Pais.

Visit our website and stay up to date on XL Program at http://www.centralefies.it/xl