NOWNESS presents Out of Blueprints, a new online exhibition of moving image work on the occasion of Cao Fei’s solo exhibition, Blueprints, at the Serpentine Galleries, which has been temporarily closed in response to the global spread of COVID-19.

In partnership with the Serpentine Galleries and K11 Art Foundation, this new program illustrates how artists and institutions have turned closure into creation, and adversity into innovation, as each week an East Asia-based practitioner releases a moving image work on NOWNESS.

Standing in solidarity with artists affected by the outbreak, Out of Blueprints traverses borders to make thought-provoking art that is freely accessible to audiences around the world.

“People in Hong Kong and other modern cities in Asia are living in a hurry,” Cao Fei told Art Basel in an interview in 2015. “It’s like people are being chased or are chasing something.” This observation on modern behaviour inspired the artist to incorporate popular 1980s escape-and-evade video games, such as Pac Man, into the light show. Other early arcade games such as Tetris and Space Invaders also appeared in the iconography and symbolic language of the installation.

Owing to the size of the skyscraper, Cao Fei turned Hong Kong’s night skyline into a gaming interface that could be enjoyed by everyone from across the city. This democratization of art through technology feeds into the current zeitgeist where the offline art world is switching online to connect with new audiences. 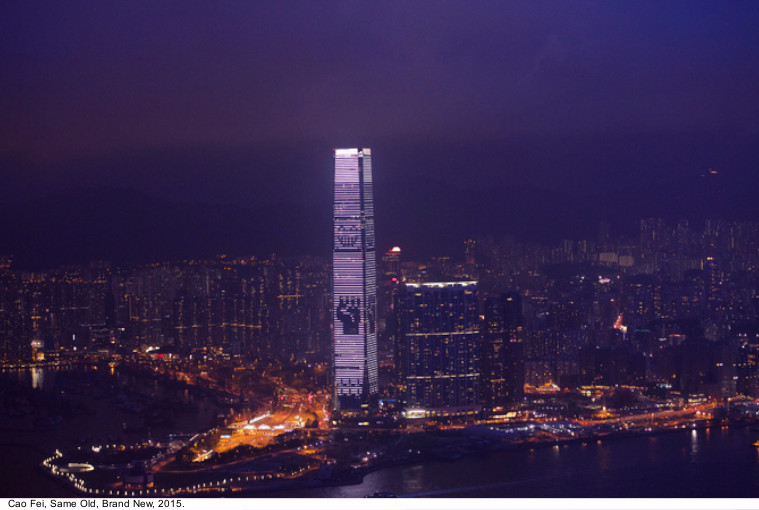 Same Old, Brand New (2015) is a testament to the significance of cultural fluidity in the artist’s work. By merging nostalgic video game culture with social commentary, Cao Fei unveils her limitless imagination where borders and disparate practices can fade into one to create invigorating new realities.