Asta Gröting: “Where do you see yourself in 20 years”?

In her exhibition, Asta Gröting (b. 1961, Germany) combines earlier works, which turn the inside outside, with new sculptures and videos focusing on the physical and psychological deconstruction of the human body. Whether via the space created by lovers having sex or the holes made by bullets during World War II in the facades of buildings in Berlin, Gröting reveals the inner voice of things.

She draws our attention to absence and the physical and emotional gaps between people and things. Whether based on family members, friends or historical figures, Gröting’s work across media seeks to cast abstract qualities such as thought, intimacy, conflict and subjectivity. Her ongoing engagement with gaps, interior spaces, and inner organs conceptually and emotionally questions the social body by taking something away from it and allowing this absence to do the talking.

The three new videos also emphasise the relationship between object and body. The artist stages mundane objects and actions, focussing on their poignancy and intensity. Projected large-scale, they recall tableaux vivants or Old Master still life paintings. In her richly diverse artistic practice, which she has been developing since the mid-1980s, Asta Gröting translates invisible or ignored elements of the human condition into sculptures. 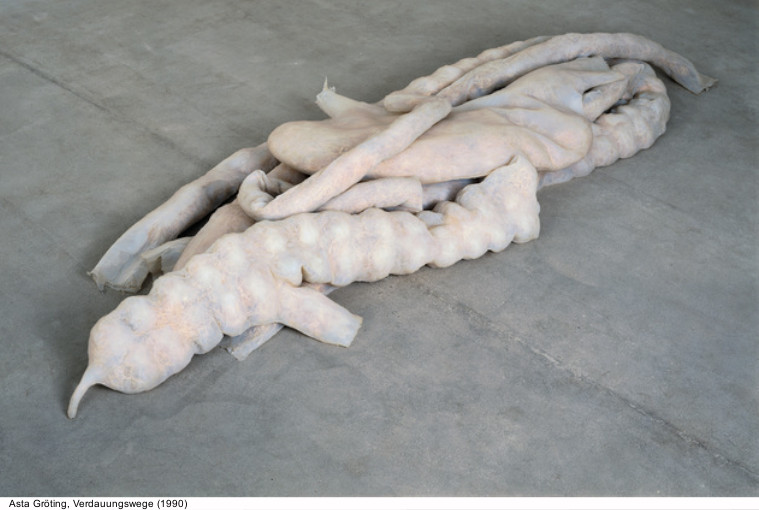 On both an emotional and a conceptual level her work addresses the role of the body in personal, collective and political contexts. Gröting’s probing of the intimate depths of the body began in the 1990s when she cast human and animal digestive systems in materials such as glass and silicone.

Emancipated from the confines of the body, Verdauungswege (1990) not only exposes a part of the its unfamiliar interior, but also gestures towards the more sensual aspects of the intestinal nervous system—splayed on the floor in front of us is the body’s “second brain”, which ancient philosophers claimed was the home of the soul.

Gröting continues her inquiry into the hidden spaces of the body and the emotive charge they exude in her series of sculptures entitled Space Between Lovers, which employ materials like polyurethane and silicon to depict a moment of intimacy. To create the work, Gröting literally cast two actors while they were having sex. 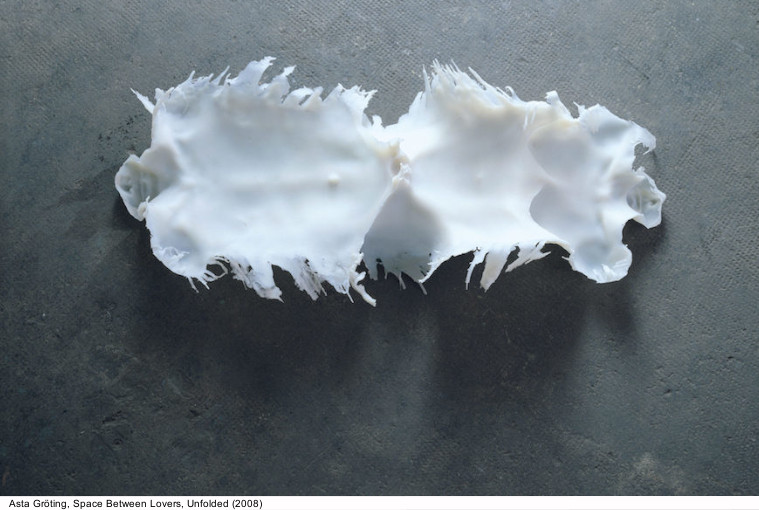 On first glance, the smooth white silicone of Space Between Lovers, Unfolded (2008) seems to resemble a delicate shell rather than two human forms. A closer look reveals a man and a woman inextricably bound together. Prised open, the contours of their bodies appear as a negative void, yet the sculpture also reveals the unexpressed, inexpressible and hidden issues of relationships.

Other works are a monument to more collective forms of absence, loss and time passing, notably Bodenplatte (2013), a series of sculptures inspired by Rodin’s Burghers of Calais. Gröting molded the base of Rodin’s sculpture in his studio in Meudon, modeling the places where the robes and feet of the six city leaders who offered their lives for the city of Calais in the Hundred Years’ War touched the base of the sculpture. 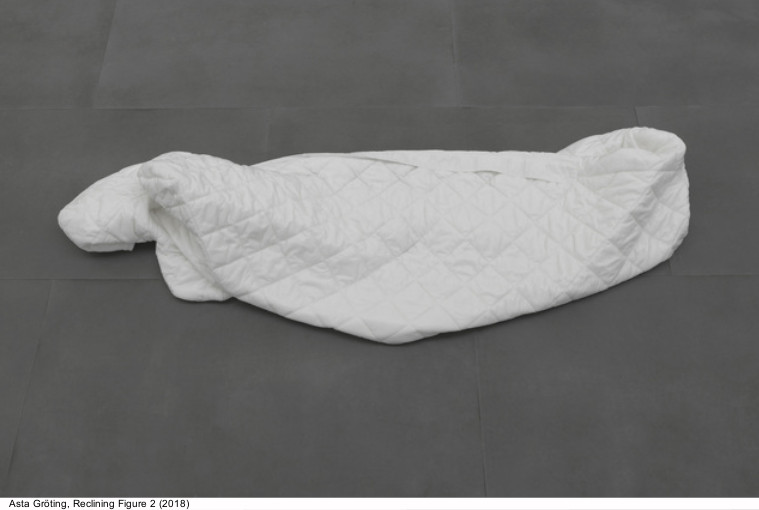 Asta Gröting reveals not only the things that can’t normally be seen, but also those we don’t want to see, whether the conveyor belt from a coal mine, recontextualised in Reifen (1987) as a sculptural object, or Reclining Figure 2 (2018), a cast of a sleeping bag, its tangled and cocoon-like appearance conveying the fragility of the human form. Her decision to work with a particular material is always determined by the story behind each sculpture. Affentanz 6 (1987-2015), for example, was inspired by 1980s leather jackets. Gröting decided to bring the narrative full circle by changing the upright, human form of the jacket back into animals walking on all fours.

Feuerstelle (2011) similarly turns the inside out: three logs made of glass glow red where they meet in the middle, conveying the heat of fire which is necessary for the production of glass. For her most recent body of works, Berliner Fassaden (2016–2018), Gröting cast in silicone the facades of public buildings damaged by the Second World War.

When the silicone is removed from the building, it reveals not only impressions of the façade’s architectural structure, but also pulls the depth of its bullet holes out onto its surface—forming bulbous protuberances that also include bits of sandstone particles, dirt, and dust that had collected in the holes over the decades. 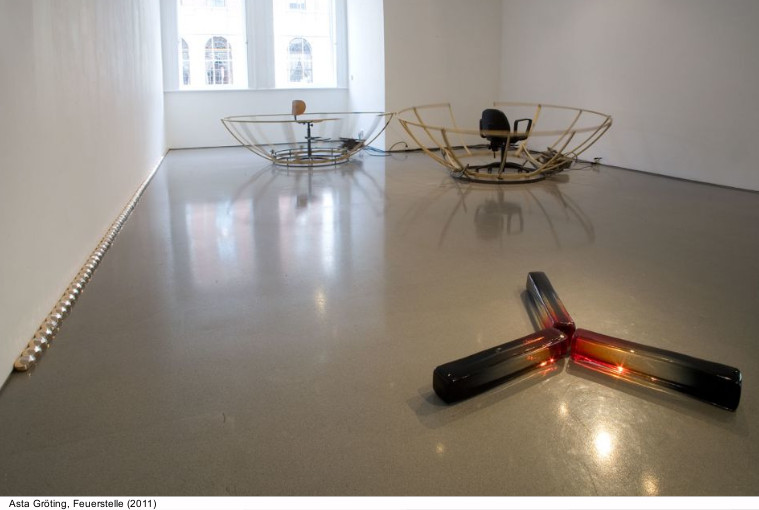 As such structures are rapidly being renovated as part of urban renewal – as well as post-war Germany’s ongoing attempt to rid its urban surfaces from remnants of the war – Gröting’s forensic approach to Berlin’s damaged facades can be understood in this context as a protest against forgetting. Equally monumental in scale and atmosphere are the three videos made for this exhibition. 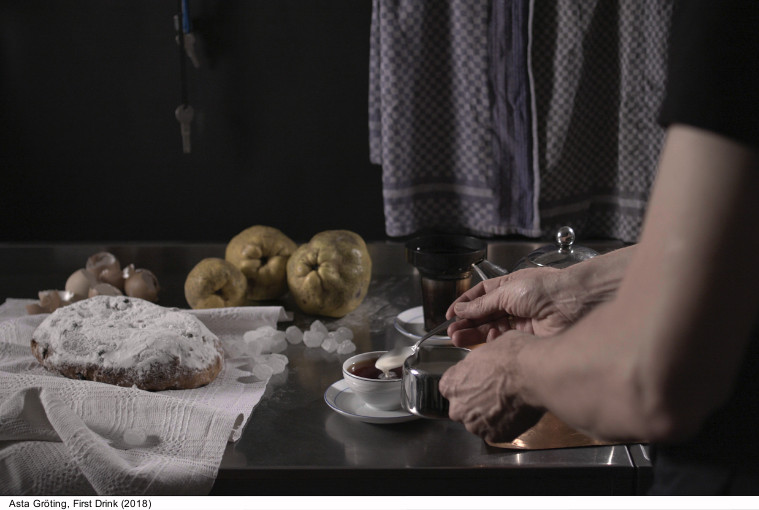 First Drink (2018) is an homage to the simple ritual of the drink each of us chooses to start the day, yet this work too condenses past and present via the physical and intensely human experience of objects, places and time passing.