GAMeC confirms and continues its participation in the Artists’ Film International, the prestigious video-art network that since 2008 has involved some of the most important international contemporary art institutions, along with artists from all around the world.

While museums and institutions must remain closed in compliance with the Government Regulations adopted to contrast the spread of the COVID-19 virus, the websites and social network pages of the over twenty partner organisations joining this initiative are hosting an online international exhibition presenting this year’s video  works: a message of solidarity and international collaboration against a historical background imposing social distancing on us all. 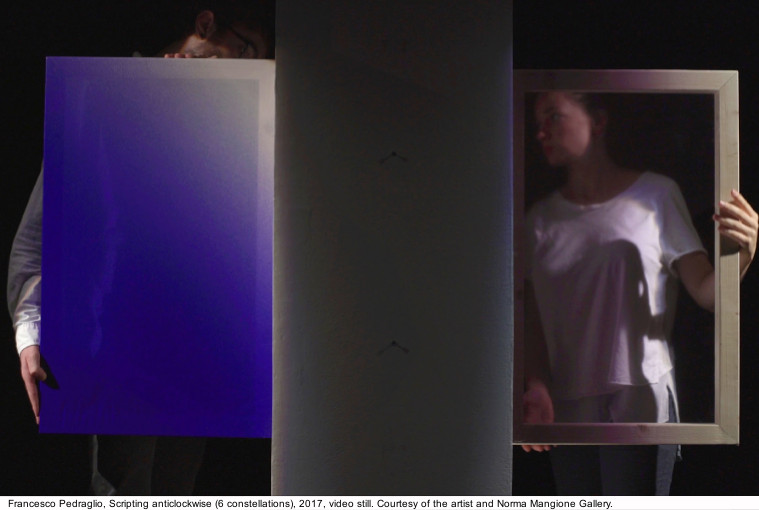 For the twelfth edition of the event whose theme is “language”, curators Sara Fumagalli and Valentina Gervasoni selected a work by artist Francesco Pedraglio (Como, 1981). Developed from a live performance, Scripting anticlockwise (6 constellations)(2017), is a film adopting an abstract narrative, imagining six possible constellations taking shape in that space created between the narrator, the actors, the props and the dark of the night.

At the centre of a dark space, the camera’s anticlockwise rotation around a column marks the rhythmic succession of a series of abstract images. Like lines connecting dots spread around a sheet of paper, trajectories, colours, shapes and volumes seem to materialise fragments of an unknown alphabet, a silent and symbolic language. Meanwhile, in what seems to be a divinatory process, a voice-over uses these very same fragments to propose starting points for futures stories.

Filmic reality takes shape through words. As emphasized by the curators, a visual imagery is not only created by the eloquent use of words and the construction of verses, but also via the development of a plot, that sequence of actions that the artist/director evokes to give a retinal form to images. The different sensory levels (visual and auditive) and conceptual dimensions related to theatre, cinema and narrative end up being indissolubly connected. Language names things–a man, a car, a spider monkey…–, subdividing the world into units endowed with an (ostensible) meaning–the constellations–and prepares reality to be captured by thought, the narration per se.

For Pedraglio, language is a mechanism that organises the visible: it moulds reality because it defines it in each of its parts. The image of what surrounds us is a linguistic image. Pedraglio looks at how the process of narrating and staging–oneself, or a situation–influences the relationship between teller and listener, making visible the fantasies and fictions that constitute our reality.

The video reminds us that language is a powerful tool mediating between us and the surrounding reality.

Scripting anticlockwise (6 constellations) will be available on the GAMeC website throughout the entire exhibition: every week, the GAMeC website will also host the video works presented by the other participating institutions.