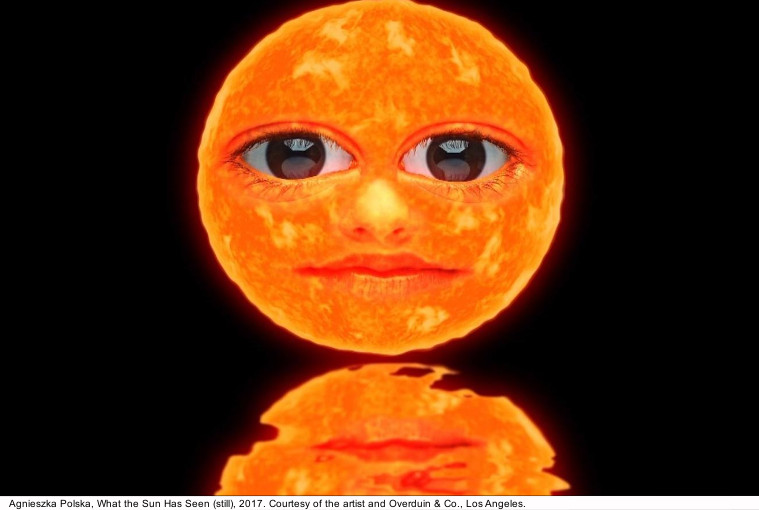 The first installation pairs two videos, The New Sun and What the Sun Has Seen (both 2017), depicting a sentient sun that is witness to environmental and ethical collapse on Earth. The sun speaks directly to the audience in half-sung monologues, moving through a range of emotional states and modes of address, from professing love and telling silly jokes, to pondering the power of language to construct a new world order. Passages of the text refer to the effect in quantum mechanics in which the observer influences the event observed through the act of interpreting it. From this point of view, the sun character is seen to be both helpless witness to and cause of the transformation it beholds.

Extending from Einstein’s notion that space-time is dynamic and relative to the perspective of the observer, the second installation, The Happiest Thought (2019), immerses the viewer in a prehistoric environment that might pre-figure our own: Earth’s biosphere before the Permian-Triassic extinction, which occurred more than 250 million years ago and annihilated as much as 90 percent of life on the planet. The piece offers a hypnotic exploration of this lush and alluring ancient environment while contemplating humanity’s potential to overcome enormous threats like the current climate crisis. 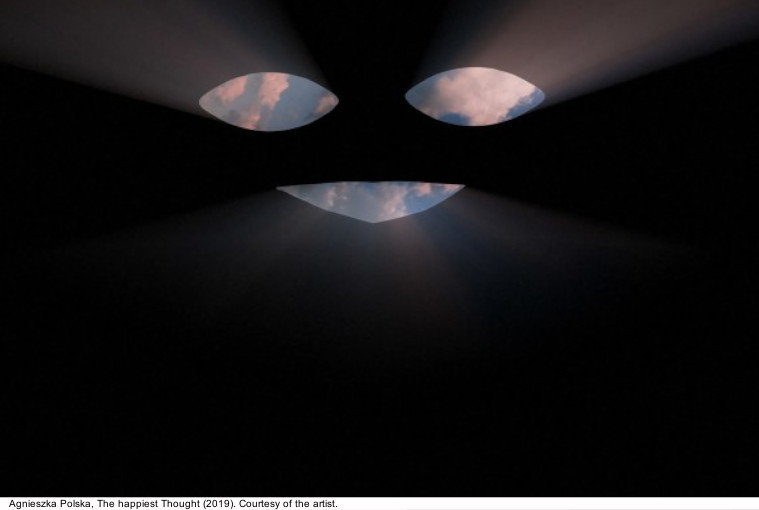 Incorporating online-video tactics such as emotional mimicry and ASMR triggers (heightened sounds and whispers that stimulate pleasant tingling sensations), Polska crafts a mesmerizing atmosphere to compete with what she calls the “environment of seduction” surrounding consumer marketing and organized religion. Through her work, the artist aims to create “a common territory of exchange, a territory for involvement in ritual,” in which we can confront our collective calamity.

Agnieszka Polska: Love Bite is organized by the Frye Art Museum and curated by Amanda Donnan, Chief Curator. Generous support is provided by the Frye Foundation and Frye Members. Media sponsorship provided by The Stranger.